IR35 legislation was updated in April 2021. These changes introduced significant tax consequences for companies which employ workers as consultants or contractors. As a minimum, all businesses need to make changes to their Consultancy Agreements to avoid sanctions from HMRC.

IR35 was first introduced by the Income Tax (Earnings and Pensions) Act 2003 to tackle the avoidance of tax and National Insurance contributions (NICs) by using an ‘intermediary’ – usually a service company owned by an individual. IR35 is often referred to as ‘off-payroll working’.

Before IR35 was introduced, companies could employ workers on a self-employed basis, often through an intermediary, instead of on an employment contract. For example, Keith would be employed as Keith’s Services Limited rather than as Keith. This could offer benefits to both sides. The company avoided paying employers’ NICs or Apprenticeship Levies and employment benefits, and the worker was taxed on profit rather than earnings, usually at a preferential rate.

Under IR35, a Status Determination Statement must be carried out for each contractor assignment which establishes whether, but for the intermediary, the worker would be a normal employee of the company. If the answer is yes, the intermediary must treat any fees received for the services as the worker’s deemed salary and tax and NICs must be paid at the normal rates. This is often referred to as ‘on-payroll’ payments. The provision of this information and recording of the Status Determination Statement should form a key part of the Consultancy Agreement. Without this, businesses are left exposed to future audits and claims raised by HMRC.

Why is the update to the IR35 legislation important?

Prior to 2021, for private businesses, the liability for assessing a worker’s status remained solely on the intermediary. In April 2021, the IR35 rules were updated and now liability sits equally with intermediary and the company engaging the contactor.

This means both the intermediary and the company can be responsible for any unpaid tax.

If HMRC investigates, the investigation can be backdated up to 6 years so the tax consequences can be substantial.

The rules apply to any contracts which began or continued beyond 6 April 2021.

What do I need to do?

Review your Consultancy Agreements. Have they been updated since April 2021?

To reduce the risk of IR35 applying, the contract should:

In addition, you should keep clear records of any consultant Status Determination Statements in case of any investigation by HMRC.

You can find out more about IR35 and how it might impact you by listening to our IR35 podcast and downloading the accompanying IR35 cheat sheet.

At Hamlins we have the expertise to advise on drafting contracts and structuring arrangements for the provision of services by an intermediary. If you are a company which employs consultants or other contractors and would like to have a conversation about these IR35 rules, please get in touch. 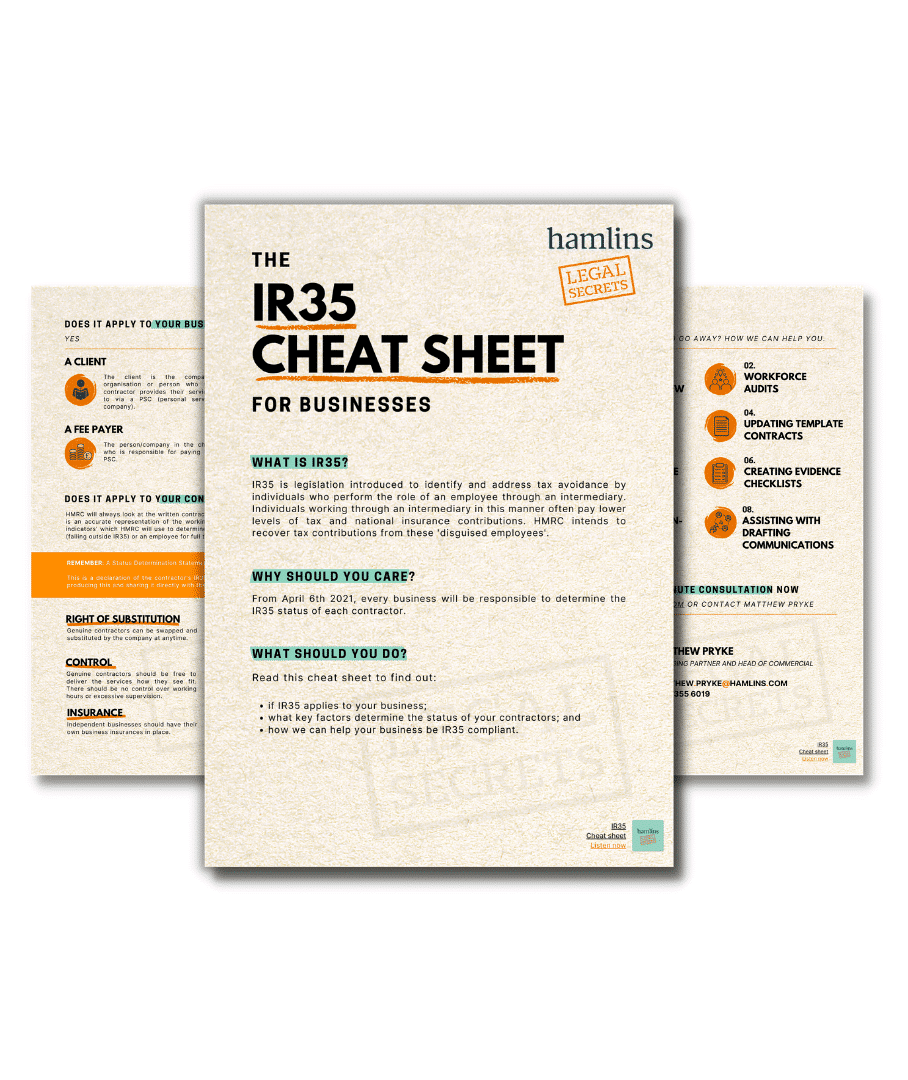