In the recent case of Taurusbuilt Limited and Others v McQue and another (2019) UKUP 81 (LC), the Upper Tribunal held that an easement could be implied into a mortgage of part, which significantly, is the first ruling of its kind.

Dinsdale Hall and 2 The Hall were both owned by Mr and Mrs Ward, but were registered at the Land Registry under separate title numbers. Although access to 2 The Halls was possible via a rear roadway, a much more convenient route was available in front of Dinsdale Hall as this also leads to two car parking spaces. Over the years, the front entrance and the parking spaces have both been used by the owners and visitors of 2 The Halls, without any express right to do so.

In 2005 Mr and Mrs Ward gained planning permission to redevelop 2 The Halls into residential apartments, securing the finance for the project over the two properties. However, due to financial difficulties, the redevelopment was forced to stop prior to completion. This resulted in the lender repossessing 2 The Halls in 2011, and then selling it on to Mr and Mrs McQue. Similarly in 2013, receivers acting for different lenders also repossessed and sold Dinsdale Hall to Taurusbuild Limited.

Mr and Mrs McQue sought to register with the Land Registry, their right of way over Dinsdale Hall, and their right to use the two car parking spaces. This application was opposed by Taurusbuild and subsequently referred to the First Tier Tribunal. The Tribunal accepted that there was no evidence of any express grants of rights in relation to the two easements and that the mortgage lender was unable to grant such rights whilst they were in possession of the property. Nevertheless, the Tribunal went on to consider the various rights that had been obtained from previous planning obligations and conveyances, of which the McQue’s would have the benefit as they were the successors in title. The Tribunal held that there was an equitable easement in favour of the Defendants, which prompted an appeal by Taurusbuild Limited to the Upper Tribunal.

The question presented to the Upper Tribunal was whether it was possible for the right of way over the roadway, and the right to use the car parking space, to be implied into the mortgage taken out by the Wards in 2005.

Easements are often only implied in two instances. Firstly, the rule in Wheeldon v Burrows (1879) 12 Ch 31, which operates to imply in favour of the purchaser, all quasi-easements over the retained land that are necessary for the reasonable enjoyment of the part of land which had been disposed.   The additional requirements are that the transferred easements must be continuous and apparent, as well as in use at the time of disposition.

Alternatively, easements can be implied by virtue of Section 62 of the Law of Property Act 1925. This provides that on the conveyance of part, all quasi-easements which are appurtenant to the land will be granted as easements to the purchasing party. Although this is of wider application than the rule in Wheeldon v Burrows, there are a number of restrictions; such as it will only apply provided that no contrary intention is expressed in the conveyance and has effect subject to the terms of the conveyance. For the purposes of this Act, a “conveyance” is deemed to include a mortgage or charge.

In reaching their decision the Upper Tribunal relied upon the rule in Wheeldon v Burrows. It was held that the right of way and right to use the parking spaces were implied into the 2005 mortgage deed. Had this not been the case, it would be very difficult to access the property which would ultimately devalue it. The Judge concluded that it was always the intention of Mr and Mrs Ward to have access to the front of the property, as demonstrated by the layout of the two properties, the fact that their letterbox was also located at the front, and their application for planning permission to convert the property to residential apartments.

This case shows how a mortgagee of part of a property is able to transfer an implied easement to its buyer when exercising its power of sale. This case has demonstrated a significant departure from other cases, as it is the first to have granted easements for the benefit of a mortgage lender, even though they were not in possession of the property. It remains to be seen whether this judgment will be followed in future cases as the decision has caused some concern, largely because easements are usually only granted when one owner of land is benefitting and a different owner is subject to the right.

Aside from this, the case has highlighted the complications that can arise when mortgaging only part of your land. 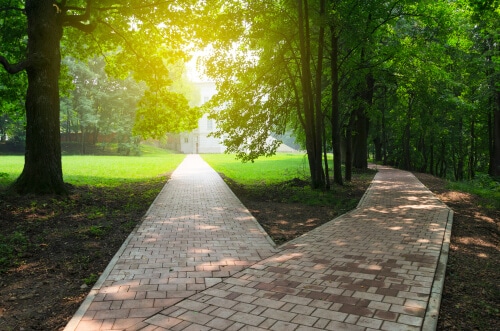